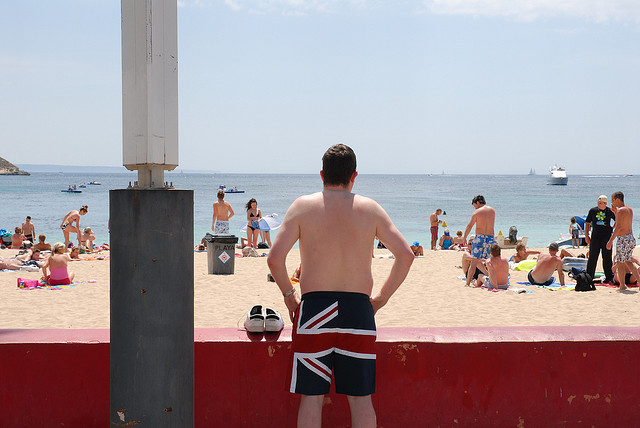 My post for the Crick Centre blog (1 May 2015), at the University of Sheffield, considering how our democracy treats voters who have moved overseas. Not very well at all, I argued.

Around 5.5 million British citizens of voting age live overseas. This is a huge number of people, certainly enough to swing the upcoming general election one way or another, should a large enough proportion of this disparate group of expatriates be minded to vote in the same way. But will the parties be making an effort to capture the expatriate vote before the 7th May?

We were given a demonstration of how important the expat vote can be during at the Scottish independence referendum. Or to be more accurate, we weren’t. This is because the Scottish government barred expatriate voters from taking part in the referendum. Even though Scots living abroad still can take part in local authority, Scottish Parliament, European and Westminster elections, they were prevented from having a say in the biggest decision faced by their country in a generation.

Disappointingly, it seemed there was barely a whimper of protest from the rest of the political class; the UK Parliament rubber-stamped Holyrood’s proposals for restricting the referendum franchise in this way. There can be little doubt the leaders of the yes campaign supported this approach because they calculated that expats were more likely to vote no to independence, Celebrity supporters of independence – including Sean Connery, who said the vote was “a matter for the people who choose to live and work there” – were willing to toe the line of the yes campaign, despite being personally disenfranchised. Although the absence of the expat vote didn’t lead to victory for the yes campaign, it surely made the result much closer than it otherwise would have been.

Overseas voters will be able to participate in the general election, but their impact on its outcome of the election will depend, most of all, on how many of them register to vote. Currently, there are only around 20,000 overseas voters on the electoral register. This figure dates from before online voter registration was introduced in June 2014 – this reform, which makes it much easier for expatriates to register, is thought to have swelled the numbers.

In early 2015 the Electoral Commission set itself an ambitious target to register a further 100,000 overseas voters before the general election. A similar drive ahead of the 2014 European Parliament elections had a disappointing result: despite the Commission aiming to recruit 25,000 new voters, only 7,000 names were added to the register.

When a cross-party group of parliamentarians led by Lord Norton considered this topic in 2014, they recommended several practical measures to increase registration further. These included better data-sharing between government departments to help identify and communicate with overseas citizens, and placing a duty on UK ambassadors to increase registration in the countries they are posted to.

If expats do vote, how will they do it? In terms of who and what they are voting for, expats’ votes are counted in the constituencies they were resident in before leaving. People living in places as far away as Manhattan, Barcelona and Abu Dhabi, therefore, might find themselves voting to elect an MP for Manchester, Barnsley or Aberdeen. France has a very different system for expat voting. In 2010, 11 new overseas constituencies for Assemblée Nationale elections were created, so overseas could elect someone to represent their interests specifically. Westminster is unlikely to do the same.

The only method of voting available is by post. Visitors to central London may have noticed the UK’s foreign residents queuing up to vote at their country’s embassy, but there are no plans at present to allow UK embassies to double as polling stations. The introduction of online voting was recommended in Lord Norton’s report; it seems inevitable that online voting will become a reality at some point in the future, although whether this will increase turnout among expats remains to be seen.

Aside from the low level of registration, the most controversial aspect of the UK’s overseas voting regime is the 15-year rule. This means that any British citizen living overseas for more than 15 years becomes ineligible to vote. Understandably, many expats fiercely oppose this rule.

The rule puts the UK in an anomalous position in Europe. The European Union guarantees that expats have the right to vote in local and European Parliament elections in their adopted country, but does not require that expats be entitled to continue to vote back home. Nevertheless, the vast majority of EU member states do allow their overseas citizens to vote without restriction. Only Ireland, Cyprus, Malta and Denmark have similar limitations on the right to vote.

The European Commission recommended in 2014 that the UK abolish the 15-year rule. Earlier this year Geoffrey Clifton-Brown MP introduced a Ten Minute Rule Bill in Parliament with that intention, to no avail. The passage of the Electoral Registration and Administration Act in 2013 provided an excellent opportunity to change the law in this area; it’s far from certain another chance to secure sufficient parliamentary time will present itself in the foreseeable future.

Some might argue that the 15-year rule is fair. After all, if someone has moved permanently from the UK, should they expect to be allowed to influence how it is governed? Democratic theorists will probably never answer the underlying questions of nationality, belonging and membership of the demos that permeate this debate.

Yet we can at least all recognise that living outside the UK does not mean that one severs all relationship with it: a great many expats maintain all sorts ties to the UK, and their lives will be affected by UK government policy in a number of important ways, for instance in relation to taxation and state benefits.

There is, unfortunately, a fairly simple answer to the question of how Britain’s overseas voters will affect the outcome of the general election. Without changes to the law and/or a significant increase in voter registration, their impact will be minimal.